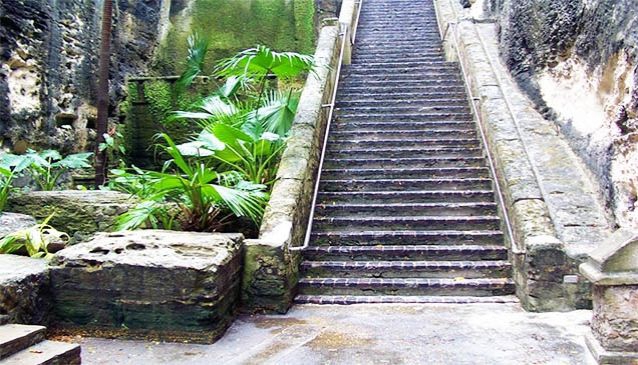 Directions to The Queen's Staircase

Expertly cut from the island's natural limestone rock, each of the 65 steps in this staircase is a reminder of the island's colonial history.

Although reports estimate that the task was completed between 1793 and 1794, historians believe that it took slaves up to 16 years to carve this 102-feet tall passageway, which they did by hand, using pickaxes and other sharp tools.

The Bahamas was frequently targeted by other European nations, such as Spain and France, so the British fought hard to claim and defend New Providence as their own. Intended for practical use, rather than an attraction, the Queen's Staircase was meant to provide a shortcut to Fort Fincastle in the event of an invasion by Spanish or French enemies.

Today the steps are one of Nassau's most popular attractions. Tucked between two stone walls, the staircase is enveloped in greenery and old-world appeal that is a wonder to behold.