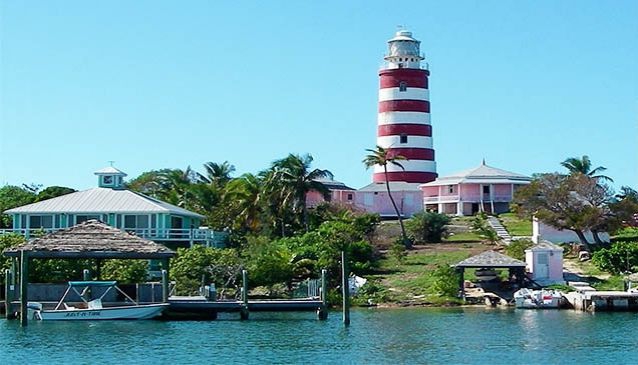 Anyone who's been to Elbow Cay's charming settlement, Hope Town, probably hasn't been able to help but notice the red and white candy-striped lighthouse across the harbour. Built in 1862, the lighthouse's unique exterior has helped it become a symbol for the town and nearby area.

While its striped walls are certainly something to admire, the lighthouse's true glory can only be found by climbing the 101-step staircase within its walls. The structure is one of the few fully-functioning hand-cranked kerosene lighthouses left in the world - there are believed to be three remaining. A climb up its spiral staircase reveals a support column, containing 700 pounds of weights used to power the lighthouse's lens. Its traditional operating system means that a lighthouse keeper is responsible for winding the weights every two hours. Some of the climb's other highlights include the kerosene tanks, lantern room, and viewing platform, which offers stunning views of Hope Town harbour and the open water to those willing to put their fears of heights aside.

Visitors might be surprised to know that the lighthouse's relationship with the townspeople did not begin amicably. Hoping to reduce the frequency of shipwrecks in the area, the British government constructed a new Hope Town lighthouse. The contribution was unwelcomed by the local townspeople who, like many others in the 1800's, made a living by salvaging from shipwrecks.